Welcome back to #SevenQuestions. My guest this week is Sara Allen Stewart, a vociferous advocate of things she believes in and a vocal supporter of her fellow authors and creatives. As usual, please take a moment to check out Sara's links at the end of the interview! And now, over to Sara... 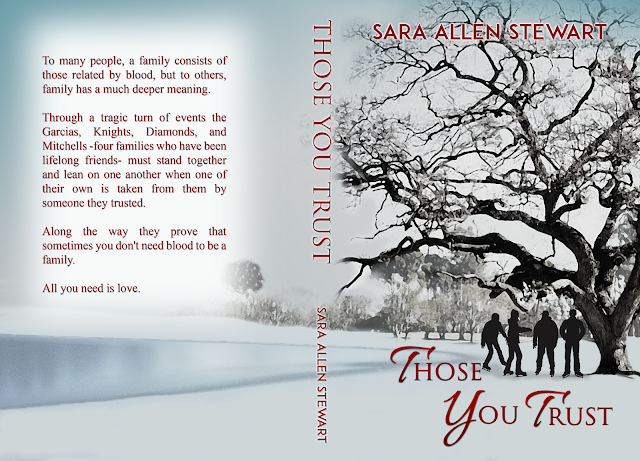 1 - Which actor/actress would you love to see play your characters in a movie adaptation?

I actually have a file with photos of who I would have play my characters. It helps me to know how someone speaks, moves, facial expressions, etc. when I write a character. I don't worry about their age now (or even if they're living), I just picture them at the proper age in my mind. I have quite a few characters in my book and the ones I would choose for Those You Trust include: Erik Estrada, Constance Marie, Donna Murphy, Clancy Brown, Kendall Schmidt, Robert Downey Jr. (it's a wish list, after all), Maureen O'Hara, Mike Delfino, Queen Latifah, Bonnie Hunt, and Lindsay Wagner. So...that's my dream cast.

2 - If you weren't able to write, how would your creativity manifest itself?

There was a long period of time when I couldn't write. I had lost everything I had ever written in a house fire and I just stopped. I found I couldn't even write a short poem. One of the things that helped was photography, my dad bought me my first camera when I was five. I LOVE taking pictures of nature, animals, or other things that I find interesting.

3 - Are you scared of running out of ideas?

Not at all, my mind is constantly coming up with a new storyline, concept, or dialogue that I write down so I can use later on.

4 - What is your biggest phobia?

Crowds...or clowns. I had a nightmare once where I was trapped in a crowd of clowns.

5 - Can you just sit down and write or do certain things like location, music, ambience, time of day, need to be right?

I don't really have a set method. Usually I'm at home, the television is on, and my critters are all lying around me. Sometimes I'm up until th wee hours of the morning, not realzing how late it is, or I wake up early because I need to get the next part written down. I also take a small notebook with me everywhere, just in case I have an idea, or a block of time where I'm not doing anything.

I would buy a home in the country with a huge library and spend a good portion of my time reading and writing. My dream is to move to a small town, open a second-run movie theatre, and once a month feature local youth artists. Whether in writing, painting, dance, whatever they love to do. I've found a lot of kids who love an art don't have the support of family and friends. I've found this to be especially true of young writers. Because a lot of kids start out writing fanfiction, because their favourite shows or movies are what they know, they are told that their work is too immature or that it's just a phase. This is not the case and I've found that many of them are actually telling portions of their own story in their writing. Sometimes it's someone who is being abused/bullied, someone who is depressed and self-harming, or someone who is confused and frightened by their sexuality, these kids have a story to tell and they should have the opportunity to tell that story.

Please take a moment to check out some of Sara's links. And be sure to come back next week for another #SevenQuestions