Writer...teacher...blogger...runner...player of several musical instruments...Gordon usually does more before lunch on a Monday than I get done all week. Despite that he still had time to stop by and answer #SevenQuestions. 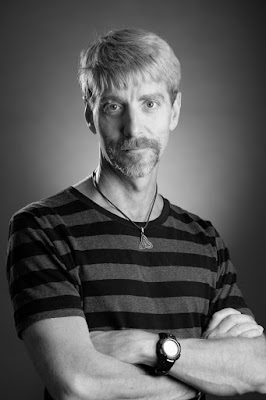 1 - Which actor/actress would you love to see play your characters in a movie adaptation?

Right now I’m working on the fifth in my series called the Parsifal Snowe Mysteries, which are murder mysteries that center around a detective agency whose staff all have different psychic abilities. For Seth Augustine, the dashing and suave psychometer — who can pick up emotional traces from objects people handle — I think it’d have to be Liam Hemsworth. His girlfriend Bethany Hale, who has precognitive dreams, I’m thinking Zooey Deschanel, who could pull off the elegant, intelligent character she is. My favorite of the detectives, Callista Lee, is a telepath; she’s the oddest of the regular characters, and has an eerie streak that makes me think of Vera Farmiga (from “The Conjuring”). Troy Seligman, who can do psychic projection, is a nervous, worrying homebody who would really rather be watching his son’s soccer game than solving crimes. Maybe Zac Efron? And last, the shy, bumbling Jeff Kolnikoff, who has telekinetic powers that are off the charts, would have to be played by Jim Parsons — Sheldon from “The Big Bang Theory."

2 - If you weren't able to write, how would your creativity manifest itself?


Besides being a writer, I’m also a musician, so I think that’d be where my creativity would divert. I play the flute, piano, and bagpipes (yes, I’m serious; I blame it on being a quarter Scottish), and am part of a band that plays for contradances and English country dances all over western New York. So as much as I’d miss writing, I would still have an opportunity to express myself.

3 - On the days you're not feeling motivated, what will inspire you or kick you in the butt to get going?

My favorite blow-away-the-cobwebs activity is running. If I can’t get into the groove in front of the computer, I often will go for a long run (or go to the gym if the weather isn’t cooperative). That never fails to get the blood flowing and the ideas bubbling.

4 - Which writer has influenced you most?

No question: Haruki Murakami. He can somehow transport the reader, using the simplest of language, into surreal worlds where you have no idea if what you’re looking at is real or a delusion. He’s absolutely brilliant, and should be required reading for anyone who writes speculative fiction.
But since no one is here to tell me I can’t, I’ll add a few others who were highly influential: Neil Gaiman, Ursula LeGuin, Umberto Eco, Stephen King, Christopher Moore, Terry Pratchett, Edgar Allen Poe, and H. P. Lovecraft.

5 - One piece of advice for new writers?

Easy. My advice is: write. Write more. When you’re done with that, keep writing. You may think that what you’re writing sucks; heaven knows mine did (and most of what I wrote prior to the age of 30 has long since been sent into oblivion, so that no future biographer of mine can find it and say, “Wow, he was really terrible at first!”). But if you keep doing it, you will get better. Also: keep reading. You will learn the tricks of the trade if you read every day (and if it’s a lousy book, you’ll learn what not to do). So that’s it: write, read, write, read. Follow that directive and you’ll get there.

6 - Which of your characters would you like to date?

I suspect my wife might have something to say about this, but since she’s not looking over my shoulder at the moment: I would definitely pull out my best pick-up line for Celia Findlay, one of the main characters in my novel “The Shambles” (scheduled to be published by Oghma Creative Media in 2018). She’s smart, sexy, brave, funny, and if she hadn’t fallen for one of the other characters in the story (damn you, Tucker Ferguson!) I’d be next in line.

No question. Fuck. It’s a multi-purpose word, is extremely expressive, and is fun to say. I have a bad mouth sometimes (I have to watch this, because my day job is “high school biology teacher”). However, I try not to overuse it, or any other swear word, in my writing — to me, the job of a writer is to write the way the particular character would speak, and not everyone swears (or swears the same way).

It must be said that I did have a reader who read my novel “Lock & Key” and said, “Wow. The Librarian sure says ‘fuck’ a lot.” I responded, “You know, I tried to talk to him about that, but he told me to fuck off.” Not sure if she found it funny or offensive — but with me, what you see is what you get, so I suppose it all works out.