#KingArthurLegendOfTheSword was NOT as bad as I'd heard it was. It wasn't WOOHOO...*runs around doing the helicopter t-shirt thing*...but it also wasn't *cries into cornflakes* This is one of those movies you start one Saturday afternoon, take a well deserved nap, and don't feel in the least bit upset at missing any of it. You'll catch the bits you missed the next time you need a Saturday afternoon nap.

The downsides
Guy Richie's choppy writing/directing ticks can be annoying in places. He borrows from himself, having Arthur carry out both sides of a conversation to show how far ahead he can think, much like Sherlock planning out his Holmes-Fu in a pair of better Richie movies. This occasionally feels like Richie is trying to do the same with the audience, handling both sides of the "movie conversation", never letting a scene land without jarring cuts back and forth, until eventually you just want to step out of the experience to let him get it out of his system. Unfortunately, he never gets it out of his system and the viewer is never fully immersed in the world. Which is a shame. Also not great is Jude Law as the bad guy. Jude Law is an okay actor, but he is a weak villain. He carries all the menace of a George Foreman grill. And you know he's going to get his ass kicked at some point, and it might not even be by Arthur. David Beckham was an annoying cameo. Not only was he overrated as a footballer (lol) but it's another thing that pulls you out of the movie. Richie also stunt-casts himself, but limits his screen time to a few seconds. Thankfully. A major downside is the lack of any strong female characters. The "mage" character was interesting, but acted more as a plot device than a character. Another female character called Maggie had more to do, but even she didn't feel integrated into the story like the male characters were. So, the movie sometimes feels like it's an annoying douche at the pub flashing his gold chains at you and sometimes feels like a conversation with someone who keeps changing the subject without letting you respond. Any good points? For a start, it's not the umpteenth standard Arthurian retelling. Richie and co at least try to do something a bit different. Where the last King Arthur movie (starring Clive Owen) tried to up the "realism" and suggest the legend is based on a Roman and his Sarmatian Knights, this version dials up the fantasy side of things, embracing the idea of mages and magical swords. And, thankfully, it doesn't spend too much time trying square the circle and bore the audience with a long-winded explanation on the whys and wherefores. The magical stuff is all enjoyable, and although it feels like it's borrowing from other fantasy films, it fits into this darker Arthur story. 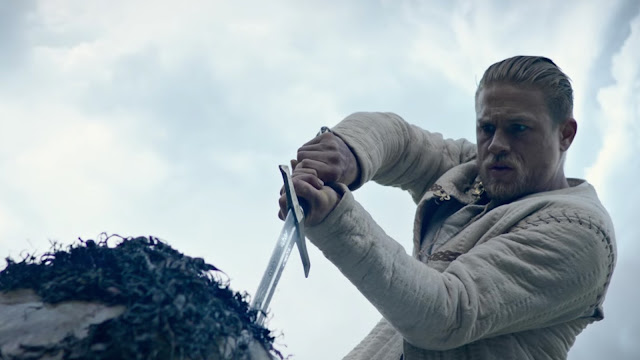 The action scenes, despite being edited like Richie eats crack for breakfast, were entertaining, and the movie's pacing means it doesn't sit too long in one spot. While this makes the storytelling a bit choppy, it means the action stuff is never given time to overstay its welcome. I also liked the weirdly eclectic cast. Hunnam does fine as a more working class Arthur and he's surrounded by a fun selection of new and recognizable faces who, at least on the male side of the cast, are a diverse bunch. No one, aside from Arthur, really gets much of a backstory, but that never really holds it back.

I'd give it a solid 7/10. I can't say it blew all the cobwebs off an old story, but there was enough new stuff to keep it interesting. Have you seen it? What did you think? Comment below! GSY
#movies #review King Arthur Movie Review