September 15, 2014
One of the most thankless tasks, in any profession, is following someone regarded as the best. In comic books, following Frank Miller in the 80's would be like following Einstein at a comedy club after he's finished his set with the punchline: E=mc². Or something. You get my drift. Either way, Miller moved from Marvel's Daredevil to write the career defining Batman series "The Dark Knight Returns" for DC. He also left after writing probably the most well known and loved Daredevil story ever: Born Again.

Ann Nocenti, editor of Uncanny X-Men, got the call to take over from Miller. Often forgotten, sandwiched between superstars like Miller, Kevin Smith (yes, Kevin Smith the movie director) and Brian Michael Bendis, I believe Nocenti wrote some of the best Daredevil stories ever. She moved away from Miller's noirish crime stories to tackle more societal issues, managing to broaden the scope of the character while not losing sight of who he was and what he stood for.

Matt Murdoch formed a free law clinic with his recovering addict girlfriend Karen Page. He tackled things like slumlords, the illegal dumping of chemicals and aligned the character more with the residents of Hell's Kitchen. Nocenti's liberal political ideas did not sit well with many fans, but it often took the character in interesting new directions.


The status quo did not last long as the giant Marvel crossover event "Inferno" hit Daredevil too. With John Romita Jr now providing regular art, this is where the series hit its stride. As New York is devoured in the Inferno, Daredevil battles demons, both real and imagined, as he fights for his life. He crosses path with new villain Typhoid Mary...


...his clinic is destroyed and his girlfriend runs away. He is battered and broken. He becomes a drifter in upstate New York as he attempts to put his life back together.

Throughout Nocenti's four and a half year run, she never shied away from difficult subject matter or confronting her hero with himself. During Matt's sojourn in upstate NY, he crosses paths with Blackheart and Mephisto who try to corrupt him, then break him and when that fails, just kill him. DD is literally dragged through hell and eventually ends up back in Hell's Kitchen believing himself to be Jack Murdoch (his own father) and a boxer. A blind boxer. Meanwhile, someone is masquerading as Daredevil in an attempt to sully his reputation. Nocenti concludes her run with Daredevil trying to win back his good reputation.

It's hard to encapsulate Ann Nocenti's tenure on the book without going into much greater detail. Often, Nocenti would tackle the metaphorical side of the Daredevil, taking a human with extraordinary skills and having him face off against demonic entities in a battle over his own mind and his own beliefs. Other times, Daredevil met people who believed differently from himself but were put in peril where he had to pick a side. Often, the line between right and wrong was obfuscated. 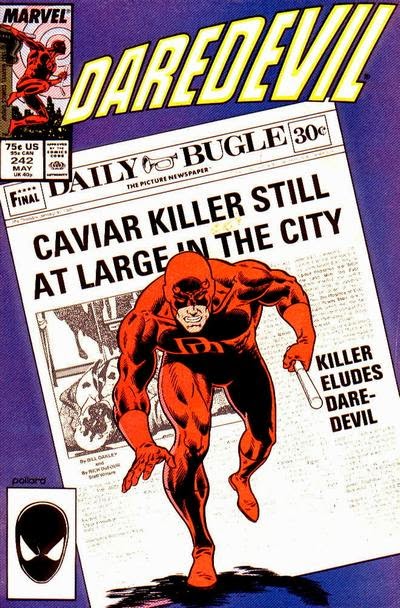 #242 - "Caviar Killer" was the first issue of Dardevil I owned and the reason I picked up more. Perhaps no surprise that I rate Nocenti's run so highly.