May 31, 2016
I was tagged on twitter by the awesome Mollie Wallace @readheadreader to share 20 Facts with you all. No idea why...but I have learned not to question such things. If you want to check out Mollie's answers go HERE.

And then come back to check out mine.

1. I have 6175 comic books in my collection. I counted them...and bagged them...and filed them. Yes, it took forever.

2. I can't stand the texture of sandpaper or the sound it makes rubbing against wood. It gives me goosebumps...and not in a good way. And yes, I was terrible at woodwork at school.

3. My middle name is Shannon. It's a family surname (great grandmother on my dad's side of the family), as opposed to a girl's first name. My dad also has Shannon for a middle name.

4. Despite being born and raised living no further than about a mile from the sea, I'm not the biggest seafood person. And don't even get me started about sushi...blerg! And, although my dad used to fish, I never really got into it. I did catch one fish, which looked like this...this is not the actual fish. My fish was bigger...


...so, I took that as a warning, returned the devil fish to the sea and put up my fishing rod for good.

5. I have been on two cruises. Both were fun and both were filled with Star Trek geeks. I also met George Takei (Sulu), James Doohan (Scotty), and several other actors and actresses from the Star Trek shows.


6. I think the Gurkhas are the baddest mofos on the planet. If you have never heard of them you should look them up. They're the little Nepalese soldiers who fight for the UK army...even though Nepal is not a part of the UK or a dependent of it. A former Field Marshal of the Indian Army was quoted as saying: "If a man says he is not afraid of dying, he is either lying or is a Gurkha."

7. I own a kukri. It's a large machete-like knife with a curved blade used by the Gurkhas (see above). 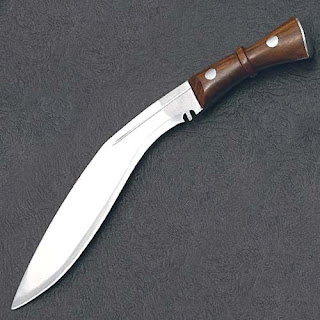 Haven't had to use it on anyone...yet.

- The Battle of Thermopylae: 300 Spartans - and 7000 others - face down the might of Persian Empire, but are ultimately defeated
- The Battle of Rorke's Drift: 141 British Army soldiers defend a mission station in South Africa against about 4,000 Zulu warriors
- The Battle of Saragarhi: 21 Sikhs chose to fight and defend an army post against 10,000 Pashtuns to give their relief time to make it to the outpost. They succeeded in preventing the Pashtuns taking the fort. All 21 died...taking anywhere between 180-450 Pashtuns with them. Sikhs are badass.

9. Careers I considered while I was still in high school: Librarian and translator. I enjoyed books, research, and quiet, so the librarian thing was interesting to me. I took French for 5 years, and briefly wondered how many jobs as an English-French translator there could possibly be. Turns out there's about 4 jobs. And no one's giving them up anytime soon. lol.

10. I've worked for the railroad since I was seventeen. First in the UK as an Engineering Technician in the Signal Department, then in the US as a Signalman, Testman, and now, Train Dispatcher. A train dispatcher is like an Air Traffic Controller except the chances of trains falling out of the sky are literally zero.

11. I play guitar, bass, and keyboards. None of them well. Me and my friend Andrew wrote many songs back when we were in our teens and early twenties, but, since you've never heard of our music, you can probably figure out how that worked out. :) I still dabble, but my 12-string only has eleven strings and a warped body.

12. On the subject of songwriting...it was a fun extension of writing stories where I got to dabble in heavy metaphor and trying to make things rhyme. My fact though is that I wrote my first song when I was about seventeen.

13. I have learned huge amounts about writing from comic books. Seriously. While they are often maligned for being "for kids" or for lacking emotional depth, I've found that to be far from the truth. And from comics I discovered my favorite proverb: If wishes were horses, beggars would ride, and one of my favorite phrases: "Pyrrhic Victory" - a victory at such great cost that it's hardly worth it. Both from The Avengers, by the way.

15. Although I've written stories for decades, it wasn't until the advent of the self-publishing phenomenon that I actually finished a novel length story and released it. That was in 2010. I've written one more book since then and working on a third now.

18. My best friend Andrew has known me since I was eleven. And despite his attempt to get away from me (he moved to Australia) he's stuck with me. I don't recognize Australian restraining orders. :P

19. I spent 12 weeks one summer, during school break, working in a chicken factory. It was NOT fun. My mum worked there for more than a decade. I learned two valuable lessons that summer. First, never look down on anyone who works in a factory. It's easily the most physically demanding work I've ever done...and I've worked in 100F heat digging trenches and running cable for the railroad. Secondly, don't mess with mum. She will fold you up into unusual shapes even though you're twice her size. 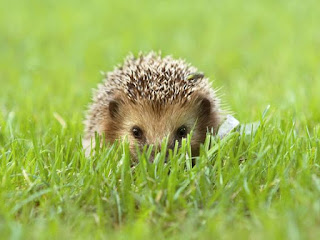